NH3 (ammonia) is a gas and sometimes called toxic or free ammonia. This type of ammonia is the dangerous part.

NH4 (ammonium) is a nontoxic salt. It is the ionised form of ammonia.

Under normal conditions, NH3 (ammonia) and NH4 (ammonium) will both be present in aquarium water. The two exist at an equilibrium point that is governed largely by pH and temperature. However, salinity and the ionic strength of the water also influence this equilibrium point. 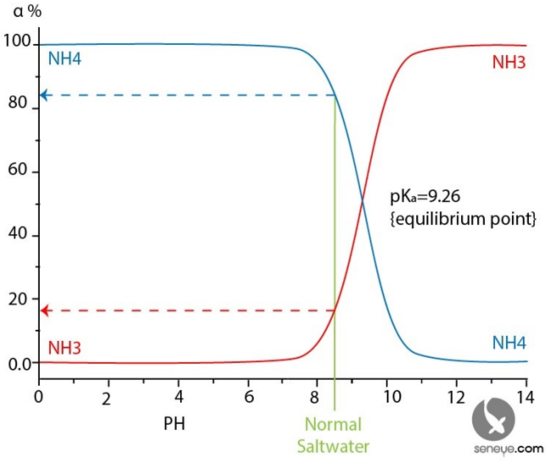 The green line on the chart below indicates the pH where a marine aquarium normally falls and shows that roughly 15% to 20% of the TAN is NH3 and the rest (80% to 85%) will be NH4. Therefore, when any ammonia (TAN) is present in a normal aquarium, the majority of it will be NH4.

Traditional test kits and photometers usually measure TAN or NH3-N and as such misinterpretations of what is being measured can occur. For more information please click here.