Aquarium help > What is Coral? > What are zooxanthellae?

Zooxanthellae are minute, single-celled algae which live inside most species of coral and help to give it colour. They photosynthesise in the same way that all plants do, and in return for their protection within the tissues of the coral they process carbon dioxide and nitrous waste produced by the coral, and feed it with sugars produced in photosynthesis.

Zooxanthellae also assist corals with the building process. It is thought that their ready absorption of carbon dioxide decreases the pH levels within the coral polyp, encouraging the production of aragonite (which occurs at a relatively high pH). Another suggestion is that the zooxanthellae help to reduce the levels of phosphate by using it in photosynthesis. Over-concentrated phosphate levels can slow or halt the production of aragonite.

On occasions, the strain on the polyp caused by environmental factors causes it to eject the algae in an event called ‘coral bleaching’ (when the coral ejects the colour-giving algae it takes on a white appearance).  It's then unable to continue supplying carbon dioxide and nitrous waste. This is a short-term response allowing the coral to protect itself. Once conditions are more favourable, the coral introduces new colonies of zooxanthellae.

A question of clades

Zooxanthellae are divided into groups called ‘clades’ and it is based upon the qualities of pigments apparent within each clade. Using this information, the hobbyist can determine the best care for individual corals with regard to the light level requirements for the different types of algae. The clades are named A, B, C (which is further divided into C1, C2 and C3), D, E, F, G and H. Of these, clades A, B, C and D are of most interest to hobbyists.

Clade A contains the green and red fluorescent clades found in anemones as well as some non-fluorescent chromoproteins. Most Clade A zooxanthellae are found in the Carribean.

Clade C collectively consists of red, cyan, green and yellow fluorescent proteins. Where found in the Atlantic, Clade C tends to be present in deeper water, whilst in the Pacific it is particularly susceptible to bleaching.

Clade D has cyan, green and two types of red pigments, all of which fluoresce. Clade D is found to be widespread and present in the Pacific, Atlantic and Indian Oceans. It tends to be quite resistant to bleaching events (notably so when compared to Clade C).

A list of corals and their clades compiled by Dana Riddle is available to download via his online article ‘Lighting by Number: “Types” of Zooxanthellae and What They Tell Us’

Why do I need special lighting?

As a general rule, the clades of zooxanthellae will all need lighting between 400-700 on the visible spectrum, which is measured in nanometres (nm). Nanometres are equal to a billionth of a metre and measure the wavelengths of the hues of light. Most light bulbs for aquariums will offer peak emissions of various wavelengths of light (the notable exception being LED lights, which can focus very narrowly on emitting one area of the spectrum), usually offering a variety of effects from the different hues featured depending on the purpose of the bulb (e.g. just for decoration or to support life)

As far as coral is concerned, there are very specific areas of the visible spectrum which are necessary for the zooxanthellae to photosynthesise. So, in order to best care for your coral, the luminaire you use must emit light in the parts of the spectrum necessary for this to occur (see Fig. 1)

C – Chlorophyll synthesis – chemical reactions of plant hormone cytokinin, which results in the formation of chlorophyll, allowing the ongoing photosynthesis and subsequent thriving of the zooxanthellae and coral

PAR is the abbreviated term for Photosynthetic Active Radiation and corresponds to the visible light spectrum. It is also measured in nanometres and PAR readings are frequently offered on boxed aquarium lights, offering customers the chance to choose appropriately.

There are a variety of meters on the aquatics market which allow the monitoring of PAR as it is a known fact that the ability to emit light at the correct wavelengths decreases with the age of the bulb used. This tends to apply to halide bulbs and fluorescent strip bulbs, as LEDs tend to emit the same quality of light until the end of their life-span, though the range of light emitted will be narrower. Without checking, it is possible that the bulb installed will provide a nice visible appearance but may not be supplying the correct wavelengths of light for photosynthesis to occur and the corals to thrive.

PUR stands for Photosynthetically Usable Radiation. It is not a scientific term, like PAR, but can be more useful regarding aquaria as different photosynthetic species (plants, anemones, corals) have different PUR levels, though they may all be within the same PAR. Essentially the PUR is a more focussed term describing the specific PAR levels used by each species.

Kelvin is a measurement of the colour of light at different temperatures based on the idea of a ‘black body radiator’ which changes colour as it heats up (coral should be kept at 6000-20000 kelvin). As your lights heat up to emit light, they produce different levels of Kelvin, the qualities of which change as registered below water level (see Fig. 2). Measurements of Kelvin can help you to determine how effectively your light is working and ensure that you are providing the correct qualities of light for your corals.

Fig. 2 – The changes in Kelvin underwater 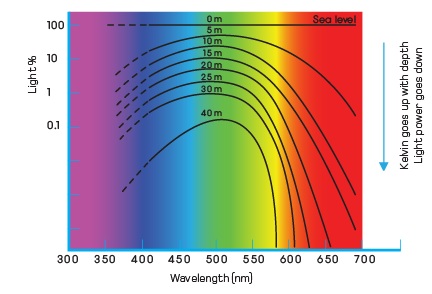 What light is right?

When you buy an aquarium light, check that the instructions or packaging contain some kind of information on the manufacturer’s expected output. This will be recorded in PAR, Kelvin or lux; ideally all three.

Prior to buying a light you should research the specific needs of the corals you keep as this will inform your purchasing to the best advantage of the inhabitants of your reef tank.

How can I check? A useful device for reef tank keepers - Seneye Reef

PAR and PUR are things that reef tank keepers should be aware of. If not actively monitoring your lights, it would still behove you to know about how PAR affects coral, and which PUR levels your corals need, so informing your choice of lights at purchase.

You can use a visible light spectrometer to check the PAR levels of lights, though this would only allow you to make light readings from outside the tank. In order to ascertain the PAR levels within the tank, you will need a specific light monitoring system (such as the one incorporated in the Seneye Reef device) allowing you to take readings underwater and if necessary at different levels of the tank to establish which areas are most suited for corals.

Light degrades in intensity (measured in lux) and spectral quality as it passes through water due to interference (see Fig. 2). The PAR level drops because certain wavelengths of light (the blue end) find it easier to penetrate the water to depth whereas the other colours find it increasingly difficult and so are stopped at different levels.

Fig. 3 Approximate distribution of PAR (in nanometers) from 2x 250W halide bulbs (B) positioned centrally above an aquarium 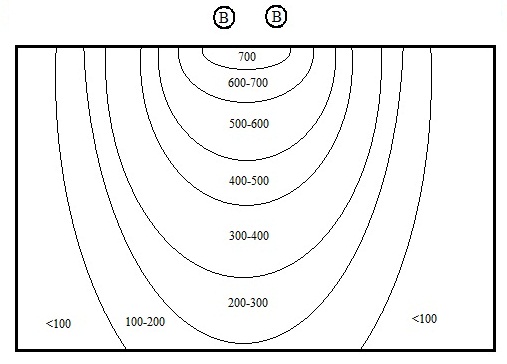 A lux reading shows the level of occurrence of perceived luminous flux (the amount of light) in a particular area. If the light is too intense or too weak, photosynthesis will not be able to occur regardless of whether the spectral elements of the light are adjusted to support plant life. Again, the drop in lux is due to the interference of the water. Fig 4. Shows the correlation and though there are no specific units shown (for each type of zooxanthellae the values will vary), the gist of the matter is clear. 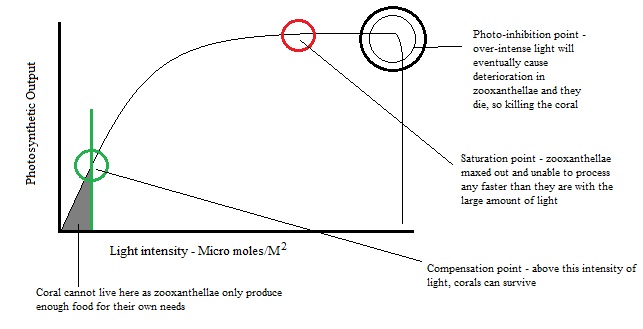 Unlike stand-alone PAR meters, the light meter on the Seneye Reef device will also measure lux and Kelvin, allowing you to check that the light intensity at different levels within the tank is suitable for your corals. PAR and lux measure the light in terms of the amount of photons available. Kelvin and PUR (there is an icon to click on the Seneye download which shows the PUR) measure the quality, and this is worth knowing with regard to your particular corals.

There is currently relatively little information on the state of play between the various clades of zooxanthellae and their lighting requirements, though using information about the depth the corals occur naturally and the type of light they are likely to receive at that depth can help. There is evidence to suggest that different intensities and PAR/PUR levels have an implication for the levels of pigment produced/emitted. However, there is little to support a fully comprehensive analysis of the best PAR/PUR/lux levels for particular clades, if such a distinction could be made.

Using the information currently available, the best scenario for corals is that their keepers cover all bases and ensure that they are providing suitable intensity and spectral areas of light to support photosynthesis.

Lizzi uses a seneye device for her coral research.