Modern lights will often produce strong colours which are way off the kelvin (K) line (the curved black line in the centre of  the CIE spectrum shown below). Any light that does not fall on the line can be classified as a colour but not a kelvin. 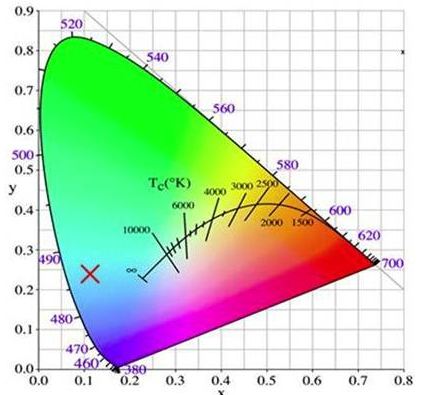 Once you are above 10k the kelvin quickly shifts up and toward infinity with the addition of only tiny amounts of blue light. This will create a point so far off the line that we have to label it ‘not a kelvin’. Also plant tubes often high in green can pull the spectra point away from the line toward being a green color.

Actinic lighting does not have a kelvin; it is a blue coloured (wavelength) lamp and a single tube can add significant amounts of blue which will also give ‘not a kelvin. Seneye looks at the combined light hitting an area i.e. what the plant or coral will receive. The advent of led lights (especially high blue) has made this deviation away from a kelvin much more common.
Hope this helps in your understanding and also helps you understand why we included a 3 point spectra meter on the software to help people see where there light is peaking even when a Kelvin is not present.
We do have some info on the main web site that is worth a quick read and can be linked to from below: